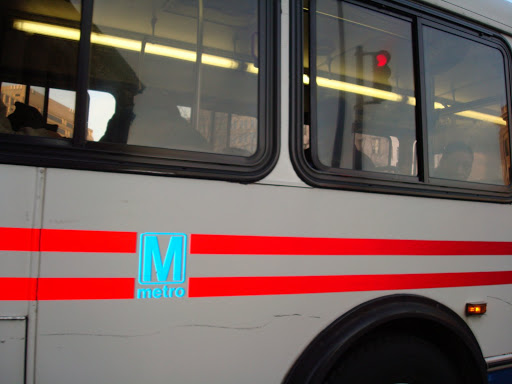 I am having to stop home in the evenings to look after my terminally ill cat, which means I can no longer travel directly from downtown DC to Greenbelt to hang out with my gf. So I now travel from DC to Silver Spring to Greenbelt at least twice a week via mass transit because I don't want to drive my Ford Festiva on the Beltway. So here is my commute in a nutshell:

1) leave office at 5 pm, travel on metro from Dupont Circle, arrive at Silver Spring around 5:40

2) Walk ALL AROUND Silver Spring metro because of a "transit center to nowhere" project that will take eons to complete. Arrive at my apartment around 6:00 pm

3) Clean my cat's dishes, put out more food, clean up whatever poop and/or puke there might be

4) Catch 6:20 bus to Langley Takoma Crossroads, the neighboring barrio where yuppies who have a disdain for immigration law pick up cheap undocumented labor to do their home improvements

5) Around 6:40 pm cross University Blvd, then New Hampshire Ave. to catch the C2 bus to Greenbelt Plaza, arriving anytime between 7:35 and 7:45 pm.

Once I have a seat on the C2 I have 45 minutes of free time to read a book or engage in my latest vice: watching LGBT TV shows on my new Creative Zen Player. Nothing makes you more deviantly hip than being the token anglo chick on the bus watching same-sex romance on a portable media device. Fortunately Amazon Unbox sell shows from LOGO and Here! TV so I have enough material for quite a few commutes. Here is what I have been watching:

This is an MTV/LOGO produced reality show in which a group of young LA lesbians decides to organize a women's club night. The women are attractive but fit the formula of Real World contestants: they are self-absorbed, superficial, and whiny drama queens. There are only two sympathetic women in the cast.

The women's night flops and is taken over by straight men the women lure to the bar just to meet the drink guarantee. Somehow it is comforting to see that even young, hip lesbians have trouble getting people to come to their events! Not that I know anyone personally that has that problem.

This is a more mature lesbian series that succeeds as a cringe-inducing comedy. The lead character, Jennifer, is still friends with her ex, Sam, an attractive lothario, though their friendship is often challenged by unprocessed past relationship issues. The series opens with Jennifer witnessing her partner Sienna cheating on her with the couple's relationship therapist. Ensuing episodes show Jen's awkward entrance into the dating world, and Sienna's unrepentant invasion back into Jen's life. The other ancillary characters, such as Crutch, the talentless lesbian folk singer, play more to type. I would give this series a C+ which automatically gets upped to a B because of the dearth of lesbian programming. And who is going to be selective about entertainment while traveling on a bus to Greenbelt?

This series features witches, gorgeous scantilly clad gay men and lesbians, and weather that turns violent on cue. It is bloody awful yet I can't stop watching it. The series centers around the unshaven and chiseled Toby, who works in the mornings serving cocktails at the beach bar of a haunted hotel. His beefcake boyfriend Kevin moves in with him to flee a homophobic stepfather. Meanwhile, a 19th century witch's spouse, Ambrosius, escapes eternal damnation after Kevin wanders into his basement prison on a beer run and ends up in his clutches. Ambrosius plots to win Kevin and get rid of his scorned wife, whom he had cheated on with his butler. The whole witch coven angle is uncovered by Toby's hot lesbian friend and housemate Van during a trip to the local historical center. This show make the Love Boat seem like Shakespeare, but at the risk of seeming superficial, you really can't beat the visuals.
Newer Post Older Post Home