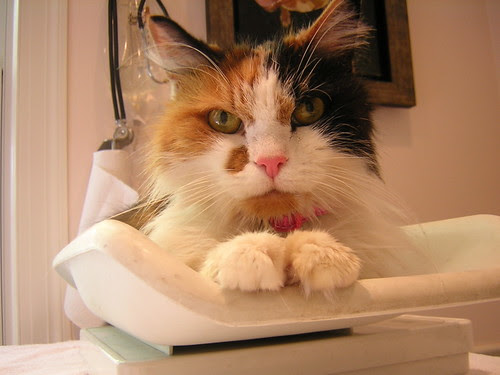 Sixteen years ago my cat George got out of the tiny house in Wheaton where I lived with my lead singer/boyfriend and went missing. A month later, I fell in love with a little calico kitten who had been born next door at the household of a DEA agent whose motto was apparently "Just Say No.....to spaying!" I brought her home to provide companionship to George's grieving littermate Arthur. We named the kitten Anastacia due to her regal disposition and our habit of naming pets after European royalty. After a few days of hissing, Arthur began grooming and playing with Anastacia when he thought no one was looking. Then miraculously, George turned up at the Montgomery County animal shelter. There were some initial tensions in the household until George regained his alpha-male status, but everyone got along beautifully.

Anastacia was overshadowed by the two boys, but her personality blossomed after Arthur's passing a few years ago. She let George boss her around but never took him too seriously. She tended to keep to herself but delighted in prancing about in front of guests with a "look but don't touch" demeanor which made it all the more meaningful when she leaped up on my desk to be petted. 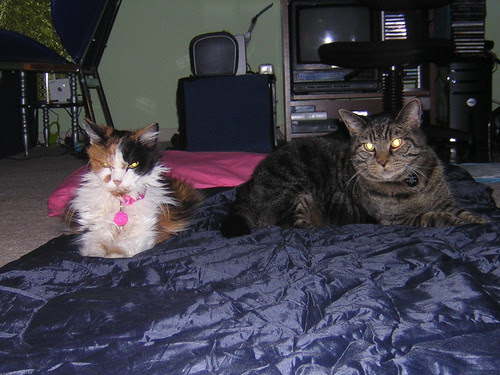 In August an ultrasound indicated she had cancer. The last few months have been characterized by weekly vet appointments and daily IV fluid injections which she accepted gracefully. In fact she was in good spirits until yesterday, my 42nd birthday. I knew it was time to say goodbye when she was unable to come to the door to greet me. I put out a sleeping bag in the living room for what I thought would be our last night together, but she suffered a seizure two hours later and passed on enroute to the emergency vet in Rockville. She is greatly missed.
Newer Post Older Post Home

So sorry to hear of Anastasia's passing.

she will be missed...she was a great kitty.

She was wonderful! I miss her too.

I am so sorry for your loss. Anastasia was a sweet, sweet cat. Please hang in there Bev, I am so sad.