I'm Mad As Hell and I'm Not Going to Take it Anymore! 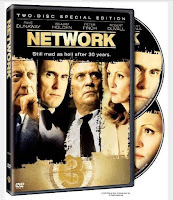 Last night I had friends over for movie night. No one had any good DVD offerings so we ended up watching the 1976 film "Network" instantly on Netflix. Network easily makes my list of top ten films. I even sampled some of its dialog for my 1998 CD Slice.

Howard Beale is a newsman whose mental breakdown is inadvertently televised. The network initially fires him but then gives him his own TV show once it is evident that his psychotic rantings and ravings generate high ratings. Faye Dunaway plays Diana, an uptight, ruthless programming vice president whose pet project is developing a TV series to broadcast the terrorist activities of a black militant group. She also monitors the success of Beale's sermons, and is thrilled when Americans across the country open their windows and scream "I'm mad as hell and I'm not going to take it anymore!!!" at the urging of a frenzied Beale.

Howard Beale eventually gets in trouble with the network when he rails against the multinational corporation that is attempting to assume ownership. The resulting reprimand from the head honcho, Arthur Jensen, is one of the most chilling and portentious monologues in cinema:


Even though its portrayal of the dire consequences of corporate media ownership has been eclipsed by reality, Network still holds up well 32 years later.
Newer Post Older Post Home