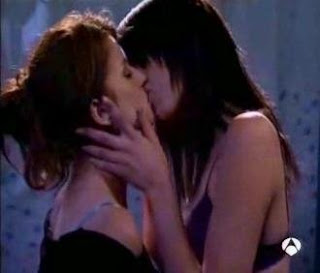 No, I have not started drinking soda! Pepsi is the moniker for the hot lesbian couple in the Spanish evening soap opera "Los Hombres de Paco" (Paco's Men). Pepa is a gorgeous, slightly tomboyish lesbian police officer who was ostracized from her family after kissing her brother's wife's sister Silvia at a wedding. Several years later she joins her brother's police squad in Madrid where the adorable redhead Silvia is the forensics investigator. They end up falling in love. The scene in which Silvia consummates their relationship in Pepa's bathroom at 2am is exquisitely romantic.

Silvia initially is conflicted about being in her first relationship with a woman, but grows more comfortable with the concept as family and coworkers show they are supportive of the couple. A benevolent YouTuber has posted the scenes chronicling their relationship with subtitles here--though the best scenes need no translation. The next season resumes in January. There were upsetting rumors that Pepa sleeps with a guy next season, but apparently this is only for purposes of procreation. Phew!
Newer Post Older Post Home