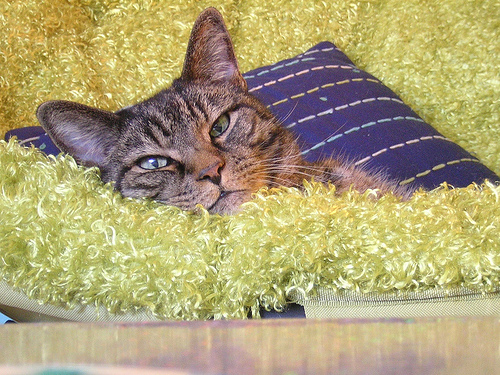 My cat George has been increasingly vocal since Anastacia's death so I called an animal communicator to decipher his distressed howls. My vet recommended the services of Diane Roadcap, who actually makes house calls. There is no doubt in my mind that during our 45 minute session she was talking to George, because he rattled off his food preferences (he doesn't like wet food except for white tuna and chicken, and does not like rice) and talked about how I administered IV fluids to Anastacia when she was sick. He also let the Diane know that the green sphere chair I recently purchased online from Target is HIS.

Apparently he has been howling a lot because he wants to tell me about all the activity in the apartment hallway and he would like me to open the window so he can hear the birds (fat chance when it is freezing outside). He was also adamant that he does not want another cat, and I was relieved to find out that even though he feels lonely from time to time, he has enjoyed the extra attention he receives from being the only cat and is getting used to being by himself. Diane also put me in touch with my mother (she knew my mother had passed away 5 years ago from breast cancer without me providing any information). The comments in response to this Washington Post story consist of mind-blowing testimonials from happy clients scattered among dismissive remarks from closed-minded people. I highly recommend Diane to anyone who wants to better understand their pet.
Newer Post Older Post Home

I am interested in contacting a pet psychic for my dog, Snickers. It might help us with the current moving situation. She's been barking so much.

Thanks for this article!