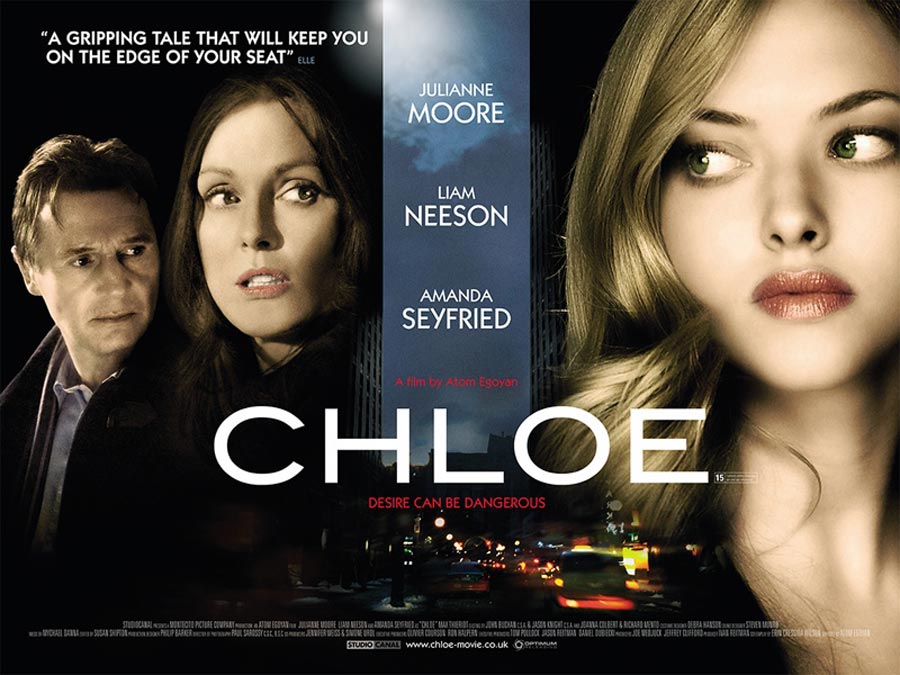 Chloe is a dark though cliche-ridden film that is watchable and engaging thanks to the stellar performance of Julianne Moore and Amanda Seyfried. Moore plays Catherine, a wealthy gynecologist who appears to have it all, yet is stressed and distressed. She is uptight about her son's adolescent sexual activity, her own aging, and most of all, her professor husband's flirtations with his young students. In fact, it is a text message from a female student after her husband has missed his own birthday party that leads Catherine to suspect he is cheating on her, so she hires the young prostitute, Chloe, (Seyfried) to flirt with him and report back to her about how he responds.

This leads to a series of encounters between the women in which Chloe arouses Catherine by recounting sexual trysts with her husband. Seyfried plays the ingenue with a hidden agenda to perfection. She is beside herself with joy at being in Catherine's presence, but her ardor becomes increasingly creepy as she continues to pursue Catherine, who is in turn trying desperately to treat their situation as just a business transaction as it spirals out of control.

Amanda Seyfried admitted that she found filming the love scene with Julianne Moore "awkward" but I think she did a very convincing job! This is a worthwhile film provided you can overlook its flaws for the sake of its masterful performances.
Newer Post Older Post Home