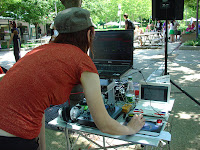 On Saturday I had the pleasure of spinning at the Crazy Quilt Music Festival in Greenbelt, MD, which is one of three U.S. cities built from scratch as part of the New Deal. I spun between musical acts for several hours, and then did a one and a half hour set accompanied by the Playa Del Fuego fire dancers. You can see video over at the ALP site.

Unfortunately the day of the gig I had to make a vet appointment for George because his third eyelid was protruding--a sign of illness in cats. Fortunately through the wonders of technology I was able to keep an eye on George during my gig. As you can see in the photo, I have a netbook next to my DJ laptop that was used to monitor petcam footage from my apartment. Despite being 13 miles away I was able to see that George was eating and drinking. His vet visit later in the week indicated that his CRF has advanced slightly, so I will need to start administering IV fluids once a week or so. He is doing much better now!
Newer Post Older Post Home