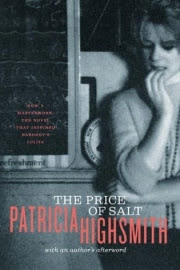 I've just finished reading 2 lesbian novels in a row (I think I did this to put off diving into the Noam Chomsky book I inexplicably bought) that provide an interesting glimpse into lesbian life in the 50's.

The Illusionist is a risque book purportedly written by a 19 year-old about a 15 year-old girl who has an affair with her father's sadistic mistress. The novel painfully depicts the girls' sterile detachment and sets the stage for the intensity of forbidden passion. The romance does not end well, but by the end of the book the girl comes to her senses and gains some self-respect, so all is not lost. The love scenes are understated, abstract, yet stirring. It was a thrilling read on the metro before and after the dullness of a typical Washington workday.

The Price of Salt is a classic. It was originally written under a pseudonym by Patricia Highsmith, probably best known as the writer of Hitchcock's Strangers on a Train, followed by the Mr. Ripley series. Though initially rejected by her publisher, it sold well and generated a cult following among gays because it has a happy ending--something unheard of in an era in which homosexuality was universally considered a perversion and gay characters were destined to suffer for their deviance.

The book details the boring life of Therese, a frustrated, emotionally distant, and under-employed set designer trapped in an ill-suited relationship with a nice but dull guy. Her anomie is heightened by working a day job in a busy department store during the Christmas holidays. Carole Aird is the glamorous soon-to-be divorcee who enters Therese's life to order a doll and forever alters her destiny.

After pages and pages of romantic tension, the relationship is consummated during a Thelma and Louise-style road trip. After Carol is forced by a vengeful ex-husband to choose between her lover and daughter it appears we are going to settle for the affair being tragically cut short. However Highsmith accelerates to a suspenseful and surprising end. The book includes an afterword from Highsmith written in 1989, six years before her death, in which she describes the circumstances that inspired the book, and the fan mail she received from pre-Stonewall gays. I highly recomend this novel. It was so engrossing I almost missed my metro stop several times!
Newer Post Older Post Home